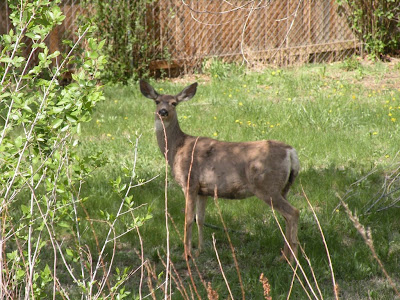 This past week I had a couple of vivid reminders that wildlife is very abundant inside the city limits of Colorado Springs. Friday I took this picture while I was waiting for some clients, to show them a house. It was on the west side, but probably less than a mile from the heart of downtown. I spooked her buddies while trying to get this photo, there were a half dozen or so grazing together. Yesterday it was really foggy, and I was heading out to Falcon to pick up a client, when a couple of pronghorn came up to fence along Woodmen road in such a way I was afraid they were going to jump right in front of my car!
Wildlife tends to do well here for several reasons. To the west of the city, we back up to the Pike National Forest and the Air Force Academy, so there is an incredible amount of unspoiled land very near. Within the city, we have a lot of open space and parkland, so there is plenty of area for wildlife to live, even if the National Forest or Air Force Academy (which is like a big national park in it’s own right) are not a factor. Also, we have a fair number of creek beds that traverse the area, making it easy for wildlife to move around, in many cases without ever hardly crossing a road.
When we decided to come to live in Colorado Springs, one factor was that we wanted to be “where the wild things still grow’, and it is nice almost 20 years later to see that they still do!
Got questions about living in Colorado Springs? Call me at 719-590-4768 or 888-568-6784!

As you pay down your home loan and your house appreciates in value, you gain equity and grow your net worth. And the equity you build can be used to help fuel your next move. If you want to learn how much equity you have in your home and how it can power a move-up, DM me today. ... See MoreSee Less

A home is lot of things – it’s a roof over your head, a place to call your own, and it’s typically a strong financial investment. That’s why homeownership still ranks as the top accomplishment Americans feel proud of. DM me so you have an expert guide to help you accomplish your dream of #homeownership. ... See MoreSee Less