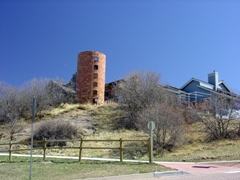 I’d guess that Colorado Springs budget woes have become famous about everywhere in the country by now. Not that they are actually that much worse than most places (what town is not feeling the pinch right now?), but Colorado Springs is more famous for how decisively the city council has acted. In particular, everyone seems to have heard about the hit that the Colorado Springs city parks maintenance budget has taken. I’m not going to spend a lot time talking about whether they were right or wrong in their decisions, but rather about how one neighborhood has responded.

Old Farm is tucked up against a ridge on the north-eastern part of the city.  It has always been popular because of its great views, parks and trails, and good schools. Old Farm Park itself has all the great elements of a Colorado Springs City Park, with rock formations, a hiking trail that goes through it (The Homestead Ridge Trail is a 7 mile scenic trail), playground equipment, and a nice spacious grassy area perfect for throwing a football or Frisbee.

When the city announced they would be cutting off trash collection, watering and fertilizing at the neighborhood parks (as opposed to the large, more famous regional parks such as Garden of the Gods), Old Farm families decided to do something. Not picket, not protest, not get mad, but something constructive. The banded together, met with the city parks department, and came up with a plan to keep their park from going downhill. 48 families signed up for weekly trash removal and cleanup duties. A fundraising effort is underway to augment the watering and fertilizing schedules, so the turf won’t die. People are involved.

I guess if you are going to have a budget crisis, is there a better outcome than having neighbors working together to keep it from adversely affecting their neighborhood?

The following is a current list of homes for sale in the 3 subdivision that make up the generic Old Farm area (Old Farm, Starwatch and The Ridge subdivsions). For RSS reader, this link allows you to see the same information