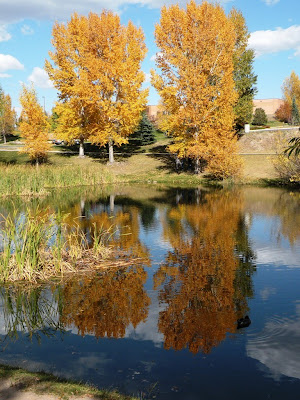 Hard to believe as it is, the Colorado ski season will actually begin tomorrow, October 7 at Loveland Ski area, and on Friday the 9th at Arapahoe Basin. I always figure on Halloween being the logical start of the season, but with some early season cold snaps, advances in snowmaking equipment, and some early natural cover, it’s like Christmas in October for those of us who love to ski.
Speaking of October sports, it is another ‘Rocktober’ here with the Colorado Rockies in the baseball postseason once again. We’ll see how far they go this time, but it is very fun having both the Rockies and Broncos doing so well!
Who would ever have guessed the Broncos would be 4-0 with a new rookie coach, a disgruntled star receiver, and a new quarterback with a mediocre track record at best? There is a lot of football to play, but they are making it a fun season to watch so far!
Today’s photo was actually taken last October at Parliament Park in Briargate
Got questions about living in Colorado Springs? Call me at 719-590-4768 or 888-568-6784! Visit me on Facebook to see even more photos!

As you pay down your home loan and your house appreciates in value, you gain equity and grow your net worth. And the equity you build can be used to help fuel your next move. If you want to learn how much equity you have in your home and how it can power a move-up, DM me today. ... See MoreSee Less

A home is lot of things – it’s a roof over your head, a place to call your own, and it’s typically a strong financial investment. That’s why homeownership still ranks as the top accomplishment Americans feel proud of. DM me so you have an expert guide to help you accomplish your dream of #homeownership. ... See MoreSee Less