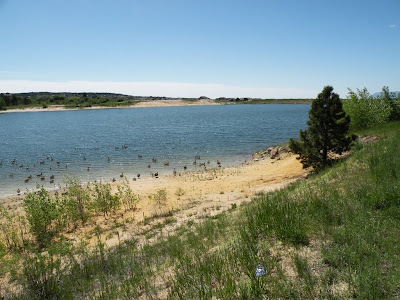 Sundays are a bit different for Realtors than they are for some people, but I thought I’d share a bit about my Sunday, just for grins.
It started out sunny, crystal clear, cool, and a little breezy. I set some showings before church, and then attended the early service at New Life, where I got to see my daughter-in-law and granddaughter, in addition to the service. My first showing was in the Monument area, where I was to meet the client, but I discovered due to re-paving, I25 was a mess, so I took the back way, Highway 83. There was a herd of antelope grazing near the road along one stretch, and then I ran into (not literally) a bicycle tour of hundred of bikes (a new twist on the Sunday driver thing!). Anyway, I eventually got there, where I took this photo of Lake Woodmoor at the complex where we were looking, while I was waiting for the clients. It was a very nice town home with good square footage for under $300k, though not quite for them. This is about as close to being waterfront as we have in Springs!
We then drove to the west side to see some more property, near Garden of the Gods, but nothing really worked for them, so we scheduled another round for tomorrow morning. I dashed home and had a quick bite of lunch, and then we were off to a going away party for a friend of ours (and client) who was leaving Holly’s school (The Classical Academy), and then to graduation party for one of her first crop of kindergartners from the school. It was kind of ironic that we had gotten to know both families virtually on the same day, the year the school opened 12 years ago. By the time we left the first party it was starting to rain (yes, that is typical, sunshine early, followed by afternoon thunderstorms), and was a lot cooler, so we were glad the 2nd event was an indoor affair.
While it wasn’t earthshaking, it was a pretty busy day, and we got to renew some old friendships. Can you think of a better way to spend a Sunday?
Got questions about living in Colorado Springs? Call me at 719-590-4768 or 888-568-6784! Visit me on Facebook to see even more photos!

Client reviews like this make our day! We absolutely LOVE helping our clients-- whether that's buying their dream home, selling their current home, or even relocating to an entirely new state! We take pride in providing the best client experience possible.

Give our team a call today!

Following expert advise can bring you greater success when you sell your house. Let's connect so you have a trusted real estate professional by your side when you're ready to start the process. ... See MoreSee Less